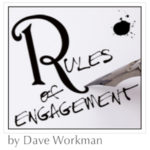 A notebook for fiction writers and aspiring novelists. One editor’s perspective.

As previously suggested, great dialogue should accomplish one of three specific goals. Whenever characters speak, we use dialogue specifically to: 1) Set a scene; 2) Develop or define a character or characters, or; 3) Forward the plot.

And yet there exists another important, although nebulous, element that infuses itself within the dialogue you write. This isn’t a goal per se, but rather an overarching stylistic approach that balances “real-life dialogue” with “on-the-page” dialogue—two wholly different beasts. Meaning that realistic-sounding dialogue might require some effort. A bit of forethought. Of practiced nuance and self-editing. (And then a few more rounds of re-editing.)

Every writer must walk a fine line between the typically inarticulate, incomplete and often rambling real-world verbal diarrhea—sorry! But true!—that our brains somehow manage to interpret, and the vapid, usually boring, just-the-facts-ma’am sort of written dialogue that some of us employ, intent on steadfastly moving the plot forward, and largely at the expense of a fully developed character. Somewhere in the middle is the sweetspot—that perfect blend of casually informal, yet subtly informative, dialogue that readers will consume like buttered popcorn at a Hollywood Premiere.

Let’s say, for instance, that our just-started sci-fi thriller (“The Great Big Giant Meteor”) is about—wait for it!—about a giant meteor. This humongous space rock will likely pulverize Earth a year or two hence. (Original idea, right?) So our principle characters are intrepid yet unsuspecting scientists, with maybe an astronaut or two thrown in for razzle-dazzle. The dialogue example below takes place early in Act 1. In the dozen (or 20 or 50) preceding pages, readers have learned a bit about a charming astronomer named Charlie, his best friend Doug—and we’ve just been introduced the mysterious Andrea, who’s arriving at The Kennedy Space Center aboard a private corporate helicopter. Our dialogue begins innocuously enough (not depicted below) with some friendly banter, and then continues:

…..“Say, I heard you and Andrea attended MIT together,” Doug said. “Quite a coincidence, huh? Crazy, working together again after all these years.”
…..“Yes, and quite a pleasant surprise.” Charlie’s smile radiated a surprising warmth. “I had no idea she’d pursued a career in observational astronomy. Andrea was always more of a people person, not a star-gazer. I thought she’d end up in Washington, maybe lobbying for NASA, hobnobbing at exclusive cocktail parties. I always saw Andrea as being the quintessential social spider intent on trapping some unsuspecting freshmen senator, then draining his wallet in a single gulp. For a good cause, of course.”
…..Doug laughed. “She told me that you two summered together in Hawai’i?”
…..“Yes, at the observatory. Both of us going for our Ph.D’s at the time. We were—for a while we were close,” Charlie said, staring past Doug’s shoulder for a long moment, reliving some silent memory. “I remember those months fondly.”
…..“She said you spent more than a few evenings at Dr. Smith’s cottage in Waikui, pouring over Hertzsprung–Russell diagrams and sipping Mai Tais.”
…..“Dr. Smith?” Charlie’s eyebrow dipped. “No, no, Diana Smith died the previous year, several months before we arrived on the Big Island. Dr. Jones was our C.O.A. liaison at the time.”
…..“Really? I must have got my wires crossed. No matter. Dr. Jones, huh? Yeah, I heard he was a real ball-buster before he retired. Frugal with his accolades. As I recall, the good doctor believes there’s an alien spaceship buried somewhere in eastern Siberia. Crazy, huh? Well, I gotta run, get this photo array off to the digital enhancement guys. Hey, you remember that NQ3 hot-spot you found last week, the one we thought might be a dust speck? Apparently not. McKenzie’s taking another look. She swears it’s in motion. Oh, by the way, how about tennis this Saturday? Don’t say no, Chuck—I’ve already reserved a court…”
…..
All of which means….what to a reader? A half-page of unnecessary banter that goes nowhere? Or something else? Might Andrea’s arrival hint of a potential love interest for Charlie—or something else? And what about the Dr. Smith/Dr. Jones confusion? A simple lapse in memory—or something else? Is there really an alien spaceship buried in Siberia—or something else? And what about that casually mentioned hot-spot? Most readers already engaged in The Great Big Giant Meteor will interpret that particular significance easily enough. But what other subtle goodies lurk within these few paragraphs of chitchat? Yes, we’re teasing the reader, but a competent writer is continually looking for areas or elements from which to evolve or twist a story, to constantly keep readers on their toes.

And, wait…Charlie plays tennis? That, amigos, is character development. The revelation will most likely have no direct bearing with the aforementioned meteor, but at least we know Charlie gets out of the office. He’s well-rounded. Maybe athletic. Most readers will subliminally remember that factoid…so when Charlie’s running after some little green alien 200 pages hence, we know he’s got the stamina. (The tennis club can also provide an viable alternative environment for our characters, should we want to break up the monotony of the more staid observatory setting.)

What else might these few paragraphs reveal? Maybe Charlie’s good friend, Doug, soon falls in love with Andrea. Or perhaps Charlie comes to believe that she’s secretly working for the Russians (for some as-of-yet unknown, nefarious purpose). Maybe readers won’t be conscious of these potential sub-plots—but the seeds have been subliminally sewn. A reader will patiently wait to see which ones sprout.

Why is scene-setting and/or character development important before revealing too much plot—in this case the discovery of the meteor? Despite how easy (plot-wise) it would be to depict Charlie sitting down at a computer console on page 1, tapping in a few cosmic coordinates and discovering an unexpected celestial body speeding toward Earth, where’s the sufficient undulating tension leading up to that moment? Who is Charlie, anyway—and why should we care about him? Maybe he’s a good person—goes to church, saves the whales, helps old grannies across the street—but until Charlie’s sufficiently developed as a character (one I’ll either love or hate, find empathic or suspicious) any substantial plot-building can wait.*

As the writer, you already know what the reader does not—that the approaching meteor is actually a billion-ton, Denver-sized space diamond in the rough. Andrea’s insanely wealthy corporate bosses have also discovered that fact and have decided to capture the meteor, ease it in a stable orbit around Earth and mine it—and what could possibly go wrong with that scenario? So despite Charlie’s best attempts to destroy or divert the rock, his efforts are continually thwarted by unknown agents. Why? Because we’re stacking additional dramatic obstacles at every turn. And dialogue is going to be instrumental in creating or continuing that drama—a direct (yet typically subtle) information-highway between Charlie and Andrea, between Charlie and Doug and (possibly) between Andrea and the mysterious Dr. Jones. When poor Doug ends up suddenly dead late in Act II, who’s to blame? And why? Questions anew that a competent writer will answer at the appropriate time. And when Andrea’s brother Sergei shows up on page 178… hmm, possibly more complications.

Ah yes, timing! Great dialogue isn’t only about concocting dramatic, informative, and oh-so-witty conversation—but also conversation that appears at just the right moment and in a logical sequence with past and future chatter. When you ask a question in dialogue (“Who would have killed Doug! He didn’t have an enemy in the world!”) allow your reader sufficient time to ponder the answer. You’re not obliged to immediately solve the mystery. Sure, you know—but it’s okay to string along the reader, waiting for the appropriate (and perhaps exquisitely unexpected) moment for the necessary reveal.

My advice is to never (or rarely) reveal too much too fast. In fact, that should probably be a rule. Rule #39: Never reveal too much relevant information too quickly. Whether you’re writing drama or comedy, a thriller or love story, sci-fi, horror or fantasy, continued suspense of one sort or another is imperative. Within each conversation, it’s okay to create a little more confusion or distraction or confrontation. With each provided answer, feel free to ask another question, or two or three. And then, late in Act III (typically your final act) begin to collect whatever loose threads that remain and resolve any unanswered questions.

*  As always, no writing rule or suggestion of mine should be considered iron clad. (Hell, I don’t even listen to myself all that often.) So if your story demands an immediate burst of plot-essential material, by all means follow your instincts. Crayon outside the lines if it feels right. All I ask is that you understand the fundamentals before attempting to break them.

Why, you ask? Did you ever put a raw egg (shell intact) in the microwave and turn it on HIGH for 2 minutes, unaware of the fundamentals regarding eggs and microwaves? Try it and get back to me. Writing a novel without knowing the rules—well, the outcome is kinda like that.