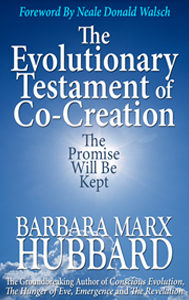 I have been blessed to know Barbara Marx Hubbard for nearly a decade now. Barbara has been mentor, teacher and friend to me over the years, and I feel so grateful that this brilliant, caring woman has been willing to play such a pivotal role in my spiritual evolution. I first met Barbara after I participated in a program called, “Gateway to Conscious Evolution,” a guided group-study program that offered the participants an empowered pathway to self-realization based on a blend of modern scientific understandings and ancient philosophical/spiritual realizations that Barbara had been gathering and weaving for many years. The Gateway program helped propel me through my own inner fears, self-limiting behaviors and life-negating beliefs by inspiring me to do the deep inner work that had been calling out to me—but that I’d been avoiding—for many years. I credit my spiritual awakening and journey into self-actualization in no small part to the tools and foundational support I received from Barbara’s teachings.

Of all the spiritual philosopher/teachers I’ve met, Barbara is perhaps the most gracious, open and exuberant of the bunch. Driven by her unending passion for life and deeply attuned to her personal mission, she continues to be a dynamic force for change well into her 80s. She coined the phrase “conscious evolution” several decades ago as a way of describing the quantum shift that appears to be occurring in human consciousness today, and has been promoting the concept of conscious evolution ever since.

The evolutionary shift of which Barbara speaks—from a narrow, ego-based and self-conscious perspective to an expanded, essence-based and whole-conscious perspective on life—may prove to be the key to our species’ ability to thrive into the future. The steady and growing emergence of this perspective within humanity offers us a radical new way of looking at the world, and helps us contextualize ourselves within the cosmos in a more loving and life-affirming way. That we appear to have a conscious ability to either embrace or reject this enhanced perspective points to our capacity, as self-aware and sentient life forms, to choose to experience ourselves as fully interconnected and engaged in a harmonious flow of life, or to remain entrenched in the belief that we are somehow separate from life and all else around us, thus possess a life we can “lose.”

Having explored the belief that we are separate from life—and from God—for many thousands of years, and having tested the theory that life is something we possess rather than the inherent truth of who and what we are, we’ve gained great wisdom. It’s time now for us to acknowledge the understandings we’ve gained through our intrepid exploration of self-aware consciousness, and to step boldly into a brand new human experiment. The question we now need to answer? What sort of world might we build if we embrace the realization that we are each integral living aspects of a vast, eternal, infinitely creative, intelligent, compassionate and purposeful living system? What sort of experience might we have if we choose to honor the fact that we are of God, in God and forever and always God…no matter what?

God, in this enhanced vision, refers to the whole of the universe, the life force, the implicate order, the zero point field, the Tao, the Great Spirit, Allah, or whatever other name we might wish to attribute to the infinite energy field out of which all things arise, and to which they all eventually return. It points to the fact that we are more than material star-stuff—we are in fact God-stuff, having a temporary human experience. To move through the world carrying this vision of ourselves as opposed to our earlier worldview that we were somehow cast off by God as flawed, problematic and disobedient “bad actors” changes everything. It’s like waking up to the realization that when a baby bird gets shoved out of its nest it’s not because the fledgling is considered unworthy by its parents, but because the fledgling has been deemed by its parents to be ready and able to advance on its own and become the best version of itself that it can become. What beauty lies in that perspective, and what freedom we gain to create and explore without shame, or guilt, or fear! What joy we feel when we relinquish our former self-limiting, hostile beliefs about who and what we are, and instead grant ourselves permission to test our capacities and push further into the universe with curiosity and wonder, confident that we will find some way to relate with whatever strange beings or worlds we may discover because we grasp that whatever we encounter will be made from the exact same God-stuff as we ourselves are made.

This reverent perspective and deep sense of connectedness changes everything. It encourages us to walk through the world with grace and ease. It also invites us to trust in the higher process of cosmic unfolding; to meet life with openness; to be courageous if we encounter something unknown; to be compassionate if we notice that others are suffering; to be kind in all of our daily interactions; to be patient while we learn more about our world and as others learn more about us, and to extend peace as our default mode of connecting with other aspects of this unified living flow.

What might our world look like once a majority of human beings view the world through the lens of interconnectedness rather than continued separation? Who can yet say? But what seems likely is that whatever eventually emerges will be something other than human in the classic definition, because the human condition that defines us today cannot support this expanded level of awareness about who we are and the universe we are within. Just as early hominids became homo sapiens sapiens, so too will homo sapiens sapiens eventually become homo universalis—similar to us today, yet evolved in a way that the difference will be obvious with the benefit of hindsight. Barbara’s mission in life has been to point the way toward this Great Turning, this cosmic birth of a new species, by encouraging each of us to birth this shift within ourselves.

I give thanks to Barbara Marx Hubbard for her decades of dedication to this evolutionary transformation of our species, as well as her willingness to shine such a bright and compassionate spotlight on this vital inner process. I honor her for inspiring countless others like me to take a similar journey into themselves that Barbara herself made back when she first discovered her holy life’s mission, so that we too could realize the truth about who we are, and what we are in.

One thought on “Barbara Marx Hubbard”