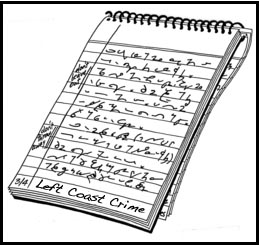 While I’ve long been an advocate and frequent attendee of the California Writers Conference scene, the Left Coast Crime Conference (Monterey, Mar.20-23) is my first foray into the fan-of-the-genre conference. And I’ve already penciled in my commitment to next year’s LCC in Portland, Oregon. The truth is, this is much more fun than writing.

Many of the fans are also authors and most of the authors are also fans. There’s a thrilling sort of intensity, a near obsessive adoration at play here. (Some flew in from the Right Coast to hang with their favorite writers. I find that intense.) The fans love new writers who, in turn, love the newly published writers, who in turn love the seasoned writers. And the elite—many of whom were present—clearly love the fans. I watched Sue Grafton get more hugs than a cute baby on Christmas morning. And she didn’t mind in the least.

Unlike the workshop-based writers conferences, where both egos and fears can sometimes run rampant, I’ve discovered the fan-based conference to be far more casual, even playful. Fans meet authors, chat with authors, eat with authors and immerse themselves in a genre they clearly love. I put the mystery fan up there with the romance and sci-fi/fantasy fan—dedicated, loyal and extremely knowledgeable. Many of the fans have tried writing, or else find themselves in the midst of their first effort—and what better way than to “feel the buzz.” And unlike the workshop atmosphere (where hopes are often dashed by a careless critique or two), the more casual ambiance of simply chatting about one’s profession, or obsession, strikes me as a far more pleasant way to soak it all up.

Far better for those just beginning to write, I think, to be mesmerized by the success of others than to to find oneself in the trenches too early. Yes, writing is hard. Yes, success is hard. But not beyond your dreams. If you’ve wandered through the Left Coast Crime Book Room, you see the astounding possibilities.

Notes From A Conference Room

So where’s the ice water?

As a first-time attendee, and first time panelist (“Now What? Industry Experts on New Publishing Options”) I devoted much of my attention to new writers, or those dangling from the precipice. The changing industry has orphaned many successful mid-list authors, who now find themselves struggling with the option of self-publishing or a smaller press. (A midlist author isn’t a best seller, but rather a self-sustaining author with a large enough fan-base to remain moderately successful, from book to book.) However, with the midlist author a vanishing species, what’s the alternative?

My co-panelists and I (moderator Stacey Cochran, Christine Munroe of Kobo and Jeffrey Weber of Stark Raving Group) were pretty much in total agreement for the duration. Yes, there’s hope. Options exist for new writers and authors in transition. Traditional publishing is in flux, and some writers will be lost to the Way Things Will Work—but I truly believe good writing will find a home.

Small presses (like Muse Harbor) are beginning to thrive—one author at a time. We’re planning just 12 titles for the 2015 calendar year, and not one David Baldacci or J.D. “Nora” Robb among them. Meaning we intend to prevail on the new and midlist author, and are hoping to boot at least one of them upstairs into that stellar category. We have only two publication slots available for our next year’s roster (and I came home with 30+ new manuscripts and queries from the Left Coast Crime crowd—so you do realize the necessity of very good writing) but if the increasing number new presses can churn out a dozen or two authors a year, gradually both writers and readers will find a new influx of talent worth their time and attention.

What about self-publishing? Sure, that’s a viable option. However, as panelist/author Claire Johnson said, “You don’t self publish because nobody else wants your work. You self publish because you want the control.” Meaning, good writing is still paramount. Self-publishing affords you the ultimate creative control—marketing, social networking, book design, management, accounting and ultimately pay-off as well—but you have to be ready for that challenge. If you’re self-publishing and still not succeeding, perhaps it’s time for a rewrite? A new novel? A fresh start.

The key to success? Many variables—with, for better or worse, a healthy quotient of “luck” among them—factor into a writer’s success. But I believe marketing to be a fundamental key. And few small presses (or large traditional publishers, for that matter) have yet to discover that magical “Can’t Fail” strategy. At Muse Harbor, we’re looking at traditional marketing solutions, but we’re also taking the “small steps” approach, building an author’s audience one loyal reader at a time. No, you won’t be partying with Dennis Lehane or Patricia Cornwell just yet…but with a bit of luck, diligence and perhaps another novel or two under your belt, maybe they’ll be calling you up for an invite of their own.