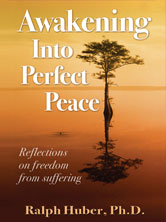 On Wednesday, February 5, 2014, from 6:00 – 7:00 p.m., MST, Hummingbird Living School in Santa Fe, New Mexico will host a one hour telecall with Dr. Ralph Huber, popular Communications Expert/Workshop Leader and Author of “Awakening Into Perfect Peace: Reflections on Freedom from Suffering.” Although the telecall is no charge to the public, listeners need to register prior to the call by clicking on hummingbirdlivingschool.org. Space is limited and previous calls have been oversubscribed, so listeners are encouraged to register soon.

Dr. Huber will teach ways to free oneself of life’s personal drama, confusion and stress while aligning with Spirit to boost creative capacity.

The topic is “Co-Creating with Spirit: Keeping in Resonance with our True Nature of Infinite Wisdom and Oneness.” Dr. Huber will answer:

Dr. Huber believes that inner peace is achieved through the path of least resistance, which is often the simplest path to take. “Most of life’s conflict is self-inflicted,” says Huber.

“Awakening” recently launched on 2013’s International Day of Peace from Muse Harbor Publishing. It can be found on Amazon.com and museharbor.com.” An engaging, inspirational speaker with practical “inner peace” tools that benefit any reader, listener or viewer, Dr. Huber can be reached for further interviews, including Radio, TV, Print, Online Blogs and event speaking engagements, by contacting Margaux(at)museharbor(dot)com.

Ralph Huber’s professional background includes educator, corporate trainer and vice-president of a New York based management consulting firm that offered services to major communication and retail industries. He is currently a member of Hummingbird Community in northern New Mexico and serves as board president for the Unity Church in Santa Fe. Dr. Huber holds a Ph.D. from New York University’s Department of Communication Arts and Sciences. He has an affinity for Advaita, Zen and Christian Mysticism.

Friend Dr. Huber on Facebook and for information on Huber’s personal coaching and seminars, visit awakeningintoperfectpeace.com.

Muse Harbor Publishing, based in Sea Ranch, CA, was founded in 2011 as an organization of “writers helping writers, in service to our readers.” 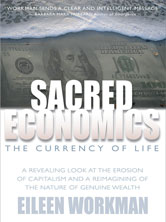 Awakening Into Perfect Peace is This Season’s Ticket to Ahhhhs
Wall Street Expert/Visionary Author of “Sacred Economics” Tells How on Telecall Wed, Jan 22.

Financial Expert/Visionary Author of “Sacred Economics: The Currency of Life,” Eileen Workman is offering a 1-hour TeleCall through the Hummingbird Living School, at no charge to the public. This conversation between Eileen Workman and Rich Ruster, Ph.D. – Economic Visionary and Steward of Hummingbird Community – will focus on “Sacred Economics and the Co-Creation of Abundance.”

Workman says, “We’ll address current economic issues in the press, focusing on current obsessions with debts and deficits and the recent denial of extended unemployment benefits. Listeners will learn the advantages of shifting attention away from money (illusion of wealth) to real wealth, (the actual tangible resources people use and need.) I’ll ask and answer common public concerns such as ‘Why is debt necessary? How can society overcome greed? Why does poverty exist? Is a moneyless society possible?'”

The Workman-Ruster financial visionary team will also explain:
1) Why so many of the things our society needs to do aren’t getting done
2) Ways people can shift their attitudes and behaviors to help change the economic paradigm
3) How America’s patriarchal society undervalues feminine work and values, leading to fewer “paying” jobs that serve the people

Workman and Ruster will be offering Q & A time between each topic, giving listeners with questions a chance to get direct answers.

Listeners will learn innovative ways to create this new economic paradigm, re-imagine the nature of genuine wealth and help weave both masculine and feminine energies of a new, resources-based economy into a whole living organism.

Hummingbird Community states that the registration is filling up and will likely sell out. Although the call is no charge, listeners must register prior to the call. To register, please click on this link: http://www.hummingbirdlivingschool.org.

“Sacred Economics: The Currency of Life” is available at https://www.museharbor.com and Amazon. com. Formerly a First Vice President of Investments with a top international Wall Street firm, Workman is available for seminars, speaking engagements, radio and TV interviews by contacting margaux(at)museharbor(dot)com.

Workman is currently CFO of Muse Harbor Publishing, based in Sea Ranch, CA, which was founded in 2011 as an organization of “writers helping writers, in service to our readers.”

A notebook for fiction writers and aspiring novelists. An editor’s perspective.

A writer will also utilize three necessary components to successfully navigate a successful story—and you’ll continually weave these elements throughout your writing, like spiraling filaments in a thread.

In no particular order:

• Scene Setting. As a reader, I want to be grounded early in each new chapter or scene. Give me a glimpse of where I am, and who I’m with and, if appropriate, when. (After dark? Before lunch? Late autumn?) Depending upon your writing style, setting a scene can be elaborate enough to fill several pages (a la George R.R. Martin), or as sparse as a few suggestive words — I walked into Charlie’s ramshackle Bar & Grill. The place smelled like old cigarettes and older sweat. You know, the kind of establishment where patrons paid in dimes and quarters, where cockroaches and winos went to die. — enough to impart sufficient information to identify or intuit the whereabouts of your character(s).

• Character Development. Give me essential information that builds or strengthens or reveals the important nuance of a character. Not all at once, of course… but bits here and there. Character development often relies on subtle nuances, appropriately placed.

• Plot Development. Give me essential information that builds or strengthens the plot. Sometimes nuanced, sometimes with the speed and intensity of a runaway train. But keep pushing the plot forward. It’s as simple as that.

In each scene you write, you’ll combine elements of scene setting, plot development and character development. Include nothing else. If you find yourself writing material that doesn’t further the plot or distinguish a character or ground the reader in time or place, those words probably don’t belong in your novel. (And if the words feel important to the the story, look closely—they’re likely one of the above ingredients.)

These three key elements, by the way, comprise Rule #5: Continually scene set, character build or move the plot forward. In novel writing, nothing else matters.

Okay, so here’s a brief hypothetical:

Barnaby awoke before dawn, shivering beneath the insufficient weight of a blanket that smelled of manure and wet straw. The frigid air lay heavy with smoke drifting from a myriad of scattered campfires that burned in the meadow. He gazed upward through the misty tendrils, into a coal black winter’s night. High amid the heavens, he could see the constellation Orion. The hunter.

…Come daylight, he knew, they would all become hunters.

He could hear a distant murmur of sleepless men, of braying horses. Somewhere in the tall grass, a young soldier sobbed. Even though he’d slept, Barnaby instinctively sensed dawn’s approach—soon the drums and bugles would beckon the war, and with its arousal, an unmitigated savagery would descend upon the brigade. Before sunset, many of those stirring restlessly around him would lay dead.

Not long ago, he might have wept at the thought of the carnage that morning would bring. But staring into the heavens, he wished for only solace. He longed for an eternity absent of fear, of hatred, of misery. For the first time since the fighting had begun, Barnaby found himself anticipating the absolute surrender of death, and relished its embrace.

…….….……
In the above paragraphs we find a piecemeal semblance of scene-setting and character development, although not much plot. Yet by the end of the passage, we infer a battle’s brewing (basic plot development) and, if properly scene-set, we suspect our character to be a soldier of some bygone era. Campfires. Horses. Bugles. Even by the discreet choice of names—Barnaby—the writer implies a subliminal clue. No, we don’t know which war…but we assume we’ll be told fairly soon and, if the writing moves us, we’re willing to wait. Nor do we have a clear physical description of Barnaby (our protagonist we presume, although still uncertain)—and yet we’ve glimpsed the lost fear in his soul. Another important character trait.

By juxtaposing well-considered snippets of information, each sentence becomes an integral piece of an enormous puzzle, yet none of the overall picture which will be revealed in haste. The writer utilizes only those pieces that properly fit, and has already begun interlacing individual filaments (of plot, character and grounding) that will eventually weave into a narrative tale. We may not know key elements of the character until far into the novel. We’re learning about this man piece by piece. We may not learn about the writer’s true intent in telling his story—perhaps not the war itself, but rather a young man’s journey to find himself, through various aspects of fate. The writer’s only begun to build a mystery of voice, of plotting, and yet each sentence is precise and methodical, like so many footprints in the sand, one after another after another in meticulous formation toward an inevitable conclusion.

One last note: When is simple too simple? When simple becomes passive. So keep your simple sentences active. (See Active Voice.) For instance:

Active: John’s snores reverberated through the house with the fury of an approaching thunderstorm. (Better.)