“The Atheist is an examination of big spiritual and philosophical issues with insights that are thought-provoking and, at times, quite brilliant.”

— Natasha Bauman,
Author of The Disorder of Longing

Author and lecturer, Dr. Arthur Moore, has made a credible name for himself in books and interviews by denouncing faith, advocating science and reason and clashing with the voices of America’s increasing religious majority. Despite his public success, he has made far more enemies than friends and struggles to maintain relationships with his homosexual son and the people in his life. After a freak tragedy leaves him briefly, clinically dead, a chance encounter brings him to privately question his worldly and cosmic perspectives. Arthur struggles with a newfound understanding of himself, and (finds himself) along a path that offers consequences for those he loves, and one he must inevitably reconcile with his established public image. 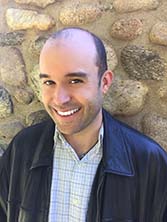 It was at the tender age of 7 that an interconnection of cells and organs called Mike Robinson (then Mikey) penned, or pencilled, his first story. Called “Aliens In My Backyard!”, it went on to become a runaway bestseller, topping international charts (or maybe that just happened in his imagination, too).

Although he has since worked as an independent videogame producer and cinematographer, writing has always been the focal point of his creative life, although to him the phrase “creative life” sounds a tad redundant. His first professional sale, a short story entitled “The Hand of Spudd”, appeared in Storyteller Magazine when he was 19. Since then, his work has appeared in a dozen magazines, anthologies and podcasts. In 2006, he was one of five guys comprising GLAWS, the Greater L.A. Writers Society, which has since become the second largest writers’ group in Southern California. He’s the editor of “Literary Landscapes”, the society’s publication. See more at: www.glaws.org