“Barbara Marx Hubbard has given us a deeply personal, prophetic interpretation of the New Testament. This book radiates the cosmic spirit of evolution. In it we find both comfort and challenge for our own journey.”

David Richo,
Author of The Power of Grace

“The Evolutionary Testament of Co-creation is a guide to the self-fulfilling prophecy of the Universal Humanity we are to become. In this groundbreaking book, Barbara Marx Hubbard brings a fresh and updated message of what Jesus taught 2000 years ago. People have referred to Jesus as a revolutionary; however, through Barbara’s eyes we discover he was in fact an evolutionary, describing for us how to achieve the Christ state both as individuals and as the entire human race. Barbara calls this collective transformation the Planetary Pentecost, a life-affirming alternative to Armageddon.

The Promise Will Be Kept is a call to action for humanity to awaken as a Planetary Social Body. It inspires each individual to awaken to his or her divine nature and fulfill the promise of performing even greater miracles than those once performed by Jesus. It carries a message for Unity amongst religions, as well as an invitation for us not to abandon the Church, but to evolve it.”

“In The Evolutionary Testament of Co-Creation, visionary futurist Barbara Marx Hubbard elaborates an evolutionary perspective on Christ consciousness, seeing in Christ an archetype for humanity’s current journey from egocentric, to ego freedom. This book will resonate with followers of her ideas—and may also build a bridge between the New Age spirituality movement and Christian fundamentalists with its inspired interpretations of scriptural passages.”

Daniel Pinchbeck
Author of Breaking Open The Head: A Psychedelic
Journey Into the Heart of Contemporary Shamanism,
and co-founder of the Evolver Network

Barbara Marx Hubbard’s extraordinary book offers an evolutionary, future-oriented perspective to the Gospels of Jesus Christ. Barbara reveals that many of the miracles Jesus performed are actually similar to those acts that we currently aspire to achieve today, but so often without consciousness of Christ love. This book builds on the great themes in the New Testament, such as Jesus’ statement: “You will do the works that I do, and greater works will you do in the fullness of time…” and St. Paul: “Behold I show you a mystery, we shall not all sleep, we shall all be changed…”

These statements are coming true. The Promise is being kept. We are all being changed. We do have the power of what we called gods. We can destroy the world and we also can restore the Earth, evolve ourselves and all of society. This is the last trump, and the trumpet is sounding for our generation.

The Evolutionary Testament invites us to form Evolutionary Bible Study Groups to join together to consider and deepen the guidance for the meaning of our new Christ like powers to be used for a positive future for all Earth life. 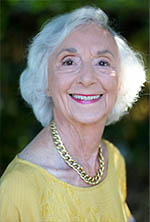 Barbara Marx Hubbard (1929-2919) has been called “the voice for conscious evolution” by Deepak Chopra. As the subject of Neale Donald Walsch’s book, The Mother of Invention, many would agree Barbara is the world’s foremost global ambassador for conscious change.

At heart Barbara Marx Hubbard is a visionary, a social innovator. She thinks from an evolutionary perspective and believes that global change happens when we work collectively and selflessly for the greater good. She realizes that the lessons of evolution teach us that problems are evolutionary drivers and that crises precede transformation. This gives us a new way of seeing and responding to our global situation.

A prolific author and educator, Barbara has written seven books on social and planetary evolution. She has produced, hosted, and contributed to countless documentaries seen by millions of people around the world. In conjunction with the Shift Network, Barbara co-produced the worldwide “Birth 2012” multi-media event that was seen as a historic turning point in exposing the social, spiritual, scientific, and technological potential in humanity.

In 1984 her name was placed in nomination for the Vice Presidency of the United States on the Democratic Party ticket. She called for the creation of a Peace Room to scan for, map, connect and communicate what is working in America and all around the world. She also co-chaired a number of Soviet-American Citizen Summits, introducing a new concept called “SYNCON” to foster synergistic convergence between opposing groups. In addition she co-founded the World Future Society, and the Association for Global New Thought.

Barbara Marx Hubbard is not an idealist, nor does she believe that social and planetary change is simple. But she does believe that humanity has the tools, fortitude, and resolve to take the leap towards conscious evolution.

Her earlier books include:

The Hunger of Eve: One Woman’s Odyssey toward the Future; The Evolutionary Journey: Your Guide to a Positive Future; Revelation: Our Crisis is a Birth – An Evolutionary Interpretation of the New Testament; Conscious Evolution: Awakening the Power of our Social Potential; Emergence: The Shift from Ego to Essence; 52 Codes for Conscious Self Evolution and Birth 2012, and Beyond: Humanity’s Great Shift to the Age of Conscious Evolution.