006-Everything Ever After – sample

Michael Picarella shares 70 collected stories and a fistful of family bits from his Southern California-based columns, “Family Men Don’t Wear Name Brands” in The Acorn Newspapers and “Picarella Family Report” in The Signal. Picarella is a father, husband, columnist, filmmaker and cherry pie lover. He lives in L.A. with his wife, son and super beagle.

“Picarella’s wry observations on fatherhood and American life are spot-on. Consider his light and heartfelt essays to be a user’s manual for dads.”

“While today’s digitized and distracted families are generally depicted as wise-cracking and argumentative, Michael Picarella’s column steadily reinforces the notion that families remain nurturing, character-building institutions built on love and caring, with a little zaniness around every corner.”

“I really enjoy Michael’s writing! His witty stories of his family life are not only charming, but very relatable.”

“My daddy’s stories are the best I’ve ever been in.” 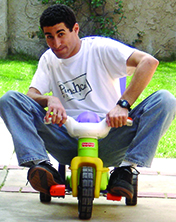 Michael Picarella has been writing his family humor column, “Family Men Don’t Wear Name Brands,” for The Acorn Newspapers since 2006. He was a newspaper reporter and features writer for over six years, he worked as a marketing writer and director at Nappic Communications for several more years, creating, among many other successful marketing campaigns, a series of viral ads that was inducted into Marketing Sherpa’s Viral Hall of Fame, and he’s the writer-director behind the two highly unknown independent movies, 1 2 3 and Punchcard Player. Picarella paid a lot of money for his BFA from the Academy of Art University in San Francisco and he relocated to Los Angeles to make movies. Today, he still lives in Los Angeles with his wife, son, pet beagle and no more movies to his name (but still working on it). To read other stories, please visit www.michaelpicarella.com.